Anthony L. Wilson is chairman, president and CEO of Mississippi Power, which provides clean, safe, reliable, and affordable electricity to southeast Mississippi. It is a subsidiary of Southern Company — one of the nation's largest energy companies.

Wilson has worked his entire professional career for Mississippi Power and the Southern Company system, starting in 1984 as an engineering cooperative education student in Biloxi, Mississippi. He moved to Georgia Power in 2002 and held several executive leadership positions before returning to Mississippi Power in 2015.

Wilson is a statewide advocate for economic development, workforce development and education. He served as the chair of the Mississippi Economic Council, the state’s Chamber of Commerce. During his term, the 2020 MEC “It’s Time” campaign garnered more than 1,000 businesses and individuals in support of the legislature’s historic votes to change the divisive state flag that had flown since 1894. It was replaced with an inclusive design that has changed perceptions about the state and enhanced its image globally.

He recently served as chair of the Mississippi Aquarium Foundation to support and open the state-of-the-art facility, one of the state’s major tourism attractions. In another statewide leadership role, Gov. Tate Reeves appointed him to lead the Energy Impact Committee for the Restart Mississippi Commission on Economic Recovery related to COVID-19. He was also appointed chair of the Economic Development Committee for the governor’s Gulf Coast Advisory Committee.

His other key initiatives include developing utility lineman programs at each community college in the company’s service territory and fostering an internship program with the state’s HBCUs.

Wilson is an active supporter of the American Cancer Society and the American Heart Association, previously filling the role of chair of the Gulf Coast Heart Walk. He is a board member for the Home of Grace, a faith-based addiction recovery center.

He earned a bachelor's degree in electrical engineering from Mississippi State University and an MBA from the University of Southern Mississippi. He is also a graduate of the Oxford University Advanced Management Program as well as Leadership Mississippi.

A native of D'Iberville, Mississippi, Wilson and his wife Tonya have three daughters – Meghan, Katie and Natalie – and two grandsons, Leo and Max. 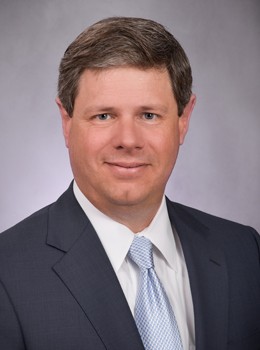